Home » Tech » What is G-Sync Technology in Monitors?

What is G-Sync Technology in Monitors?

G-Sync is a new technology by NVIDIA that gives your monitor smooth and faster gaming experience. This technology is included in some high-performance monitors.

NVIDIA has revolutionized the computer gaming displays in 2013 with the introduction of variable refresh rates. This has helped enabled gamers to enjoy highly responsive, tear-free, stutter-free experiences on monitors that come equipped with G-Sync. These types of monitors provide flawless experience to gamers and video streamers alike.

What is G-Sync and what does it do?

Have you ever played your favorite game but you noticed that your monitor has some kind of “screen tearing” where the frame is out of sync (see image)? 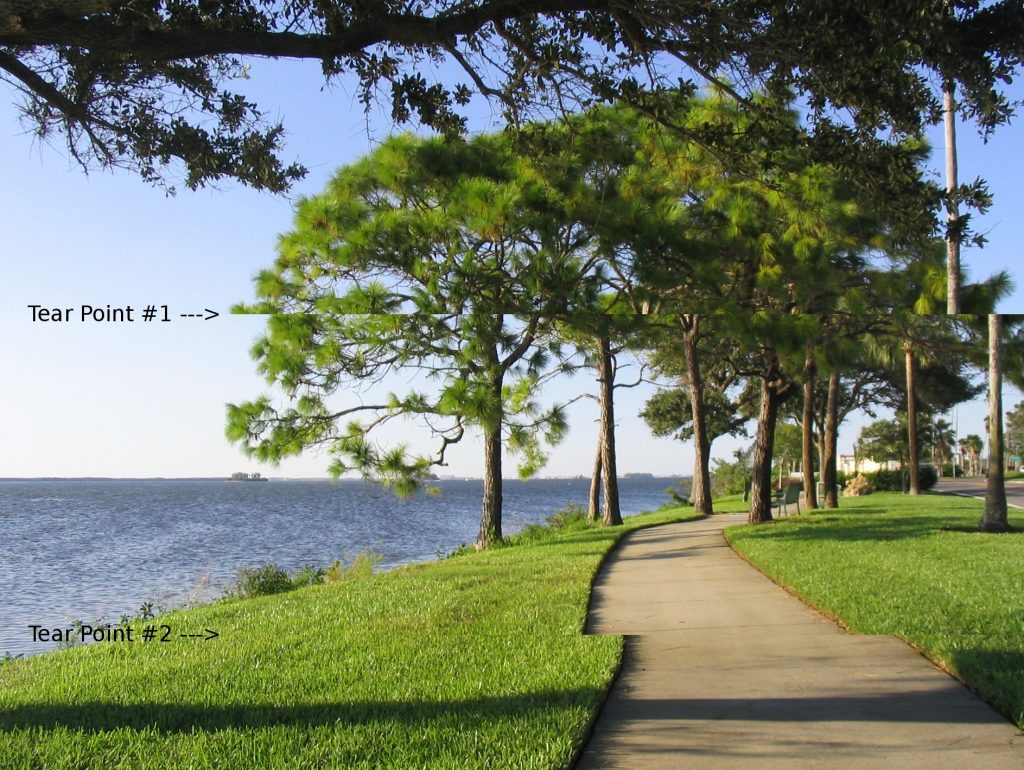 This often happens because your display monitor and your graphics card are not rendering the same frames.

Traditionally monitors have a fixed refresh rate all the time. GPUs, on the other hand, do not operate at a fixed rate. So, a GPU can (and often does) produce frames faster or slower than a monitor is able to display those same images.

This difference of the frames displayed and rendered between the GPU and monitor creates the screen tearing. When your GPUs framerate is faster than your monitor’s refresh rate, your monitor will start to show the next frame before it has finished showing the previous frame, and vice versa.

NVIDIA’s G-Sync technology solves both the problem of screen tearing and stuttering at the same time, allowing the monitor to operate at a variable frequency to match the output of the graphics cards.

With an enabled G-Sync monitor, if your graphics card is producing 160 frames per second (FPS), your monitor will operate at a 160Hz refresh rate. If you run into a more demanding situation in a game that requires your graphics card’s framerate to drop, then G-Sync will drop its refresh rate frequency to match the new framerate that the GPU is working at.

This eliminates screen tearing and stuttering and helps games feel much smoother to play.

How to turn on G-Sync?

First, you’ll want to check if you have G-Sync technology on your existing monitor, or if you’re looking to buy a new monitor with G-Sync enabled, most places will have the description letting you know. 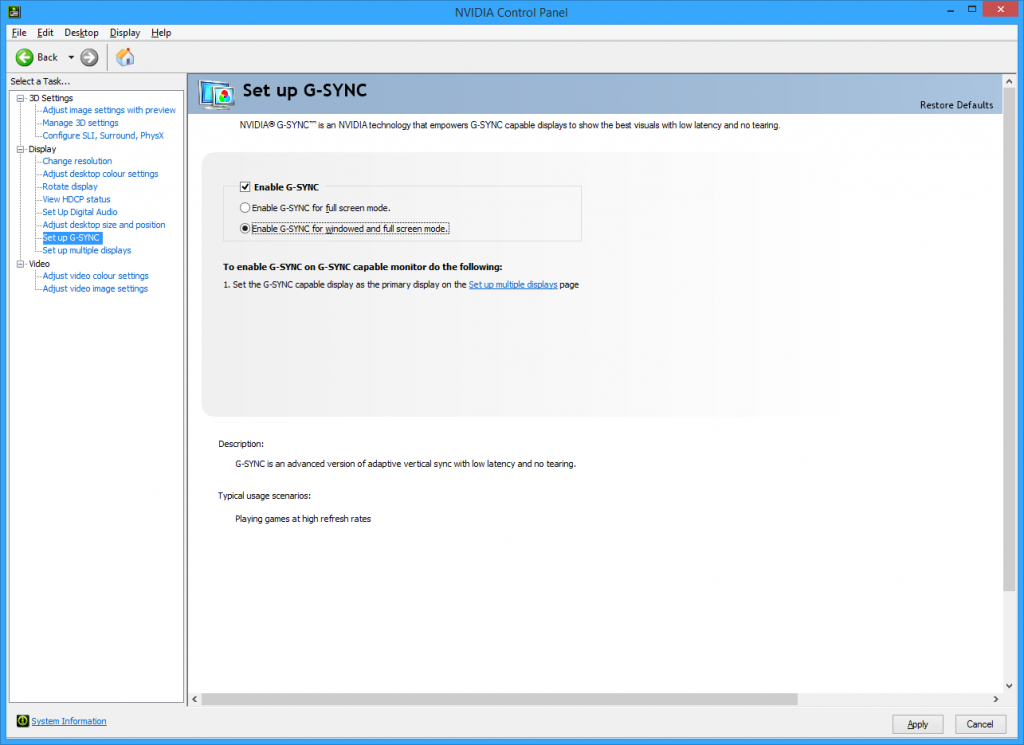 It is pretty simple to set up your G-Sync to be enabled, which should be in the NVIDIA Control Panel. To get there follow these steps:

You’ll also be able to choose whether you want G-Sync enabled for only full screen or full screen and windowed modes.

Are there alternatives to G-Sync? 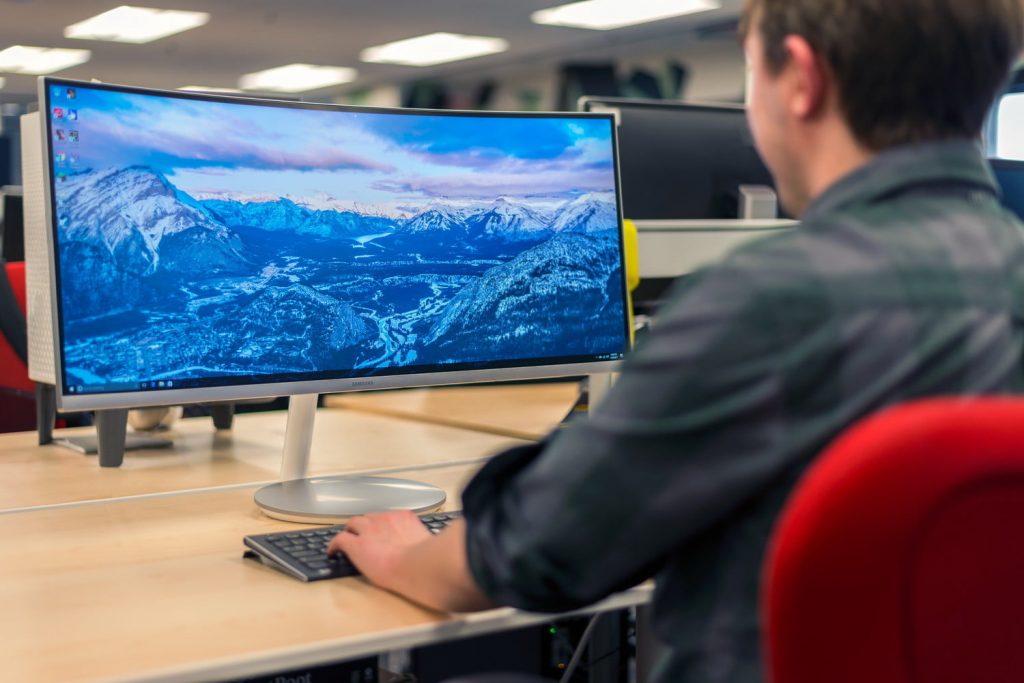 Like with any new technology, there’s always competition. Nvidia’s rival, AMD, has its own technology, called “FreeSync.”

FreeSync doesn’t operate the same way as G-Sync. It uses the existing DisplayPort interface, which doesn’t require additional AMD hardware (aside from the AMD GPU, that is) to enable vertical blanking interval.

Because FreeSync isn’t hardware based, there are more monitors that support AMD’s technology than G-Sync. Furthermore, monitors of this kind don’t require the manufacturer to install any additional hardware, which may help with the cost, making it cheaper than their G-SYnc capable counterparts. For instance, the Asus MG279Q can be found between $80-$100 cheaper than its sibling ROG Swift monitor.

Each technology has its own strengths and weaknesses. Whether you go with FreeSync or G-Sync, you’ll find yourself in a better place than you originally thought. These new features are here to help you get rid of those nasty glitches that caused many headaches.

There are only a couple of things that have drawbacks with NVIDIA’s G-Sync enabled monitors. First, is the cost of the monitor, and the second is the compatibility.

Like mentioned earlier, the cost of G-Sync can be more than traditional monitors without it. However, if you decide to buy a G-Sync enabled monitor, make sure you have an NVIDIA GPU. If your computer has an AMD graphics card, then you won’t be able to use the G-Sync technology. Nothing will be broken, you just won’t be able to enable it.

The real question: Is G-Sync worth it?

The question that keeps people in constant wonder, is the NVIDIA G-Sync technology worth the extra money? To be honest, every user is different. We understand that not everyone is willing to shell out that kind of money for games that are not graphics intensive. But if you’re building a new computer with NVIDIA components, then it might be a good idea to check out a monitor with G-Sync enabled.

If you prefer to go with AMD, then a monitor with this technology doesn’t make sense, and you’ll be saving a lot of money.

Even though the high cost of the monitor can deter someone away from this, we believe that its a great investment and that it’ll be worth it in the long run. If you want a full game experience with no lag, then this is definitely worth taking a look.